Funding helps me continue my work. Thank you for your consideration.

It all started when I walked into his office. That was the day I met an angel in my life...

about Service and Giving. Plans for the future...

Late Education icon David Booth, who I respectfully called "Professor Booth", was an Angel in my Life. I didn't know that the first day I walked into his office would be the beginning of something beautiful. 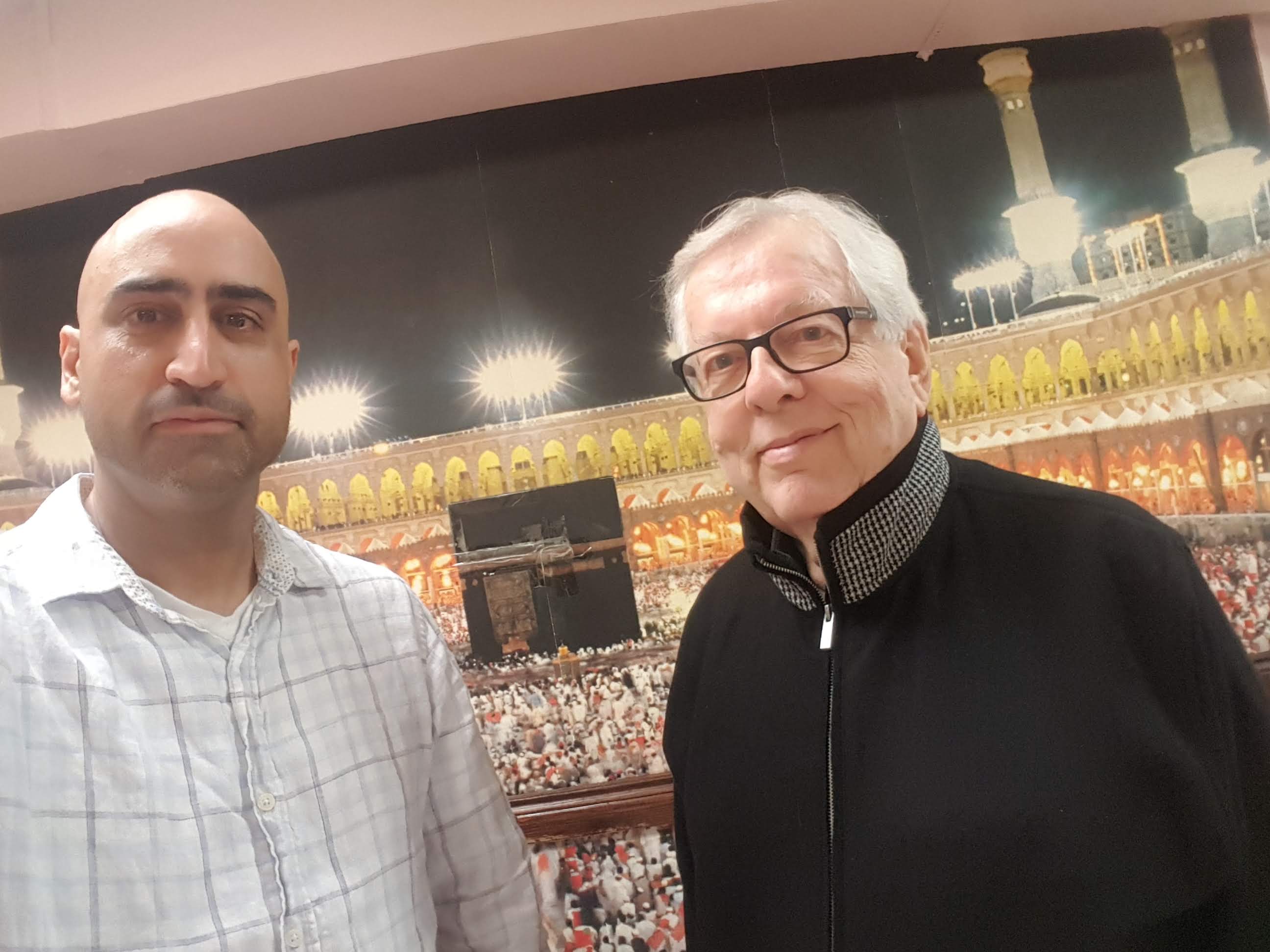 Hanging out with Professor Booth at Makkah Restaurant on the Danforth (Toronto).  He loved the naan and kababs. 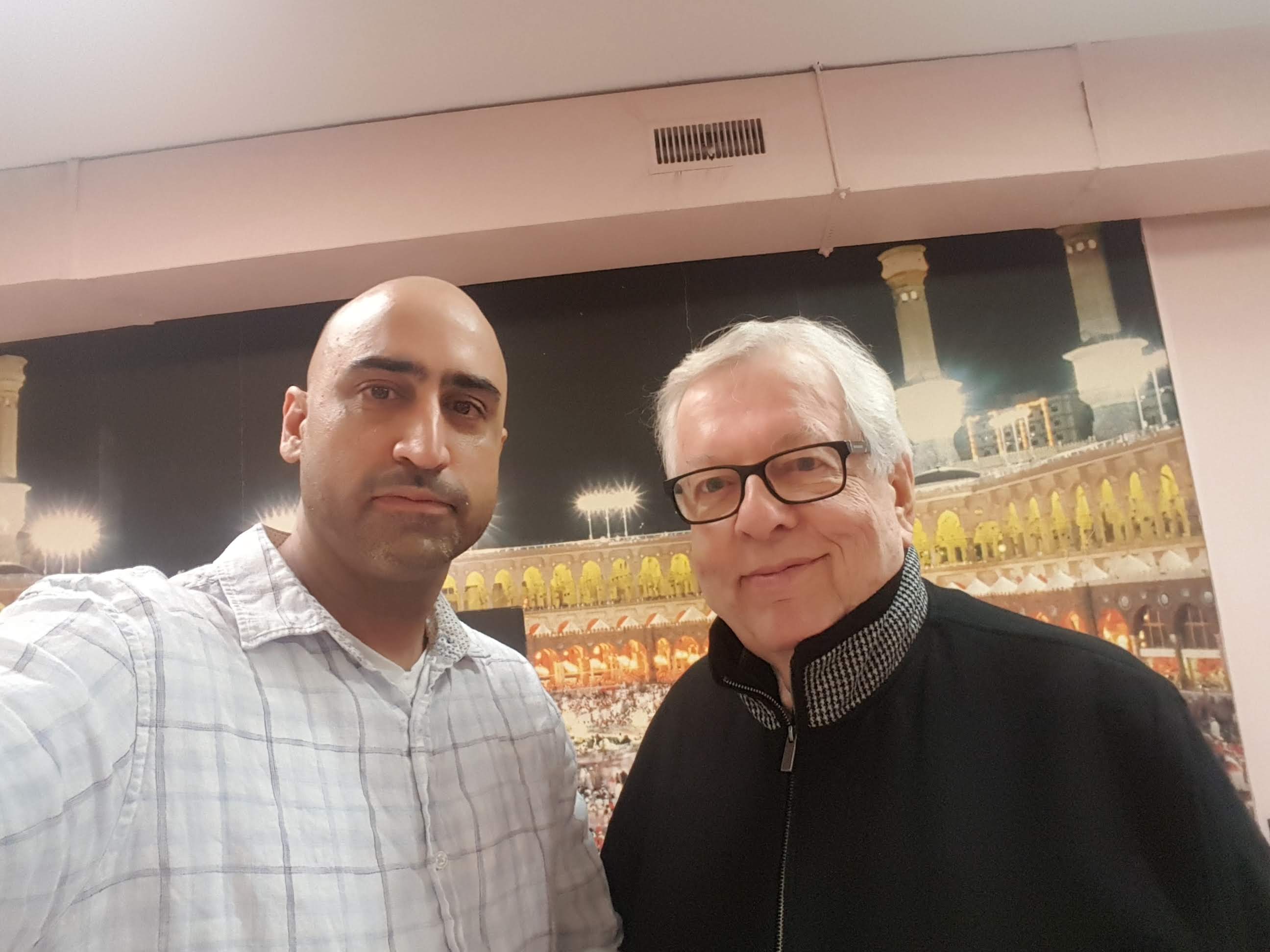 I used to tell him it's called "naan" with the "on" sound.  He used to tell me to shush and laugh, because he would say "nan."

But today I am heartbroken because there is no one for me to call anymore. Not like that. Professor Booth wasn't just a mentor to me, he was my friend, and someone who truly cared about me, just like a father would.

"Young man!" and "Okay kid," he'd always call me when we spoke on the phone. "You know I'll make time for you," he'd always say. I MEAN WHO DOES THAT?! The man was ALWAYS there for me, no phone tag, no not picking up my calls, no not showing up for meetings in his office. He helped me in so many ways, my relationships, my career, my work and every time I didn't believe in me, he refused and picked me up. "You'll get it done, you always do..." he'd say. "Work on it, it's a process, you'll make it happen. You're a smart man."

He actually got me, when so many others didn't. We connected. He understood. He was the ONLY friend who actually bought my work each and every single time. Everyone else I know didn't care or wanted my work for free. And when I refused payment, he wouldn't accept "no." 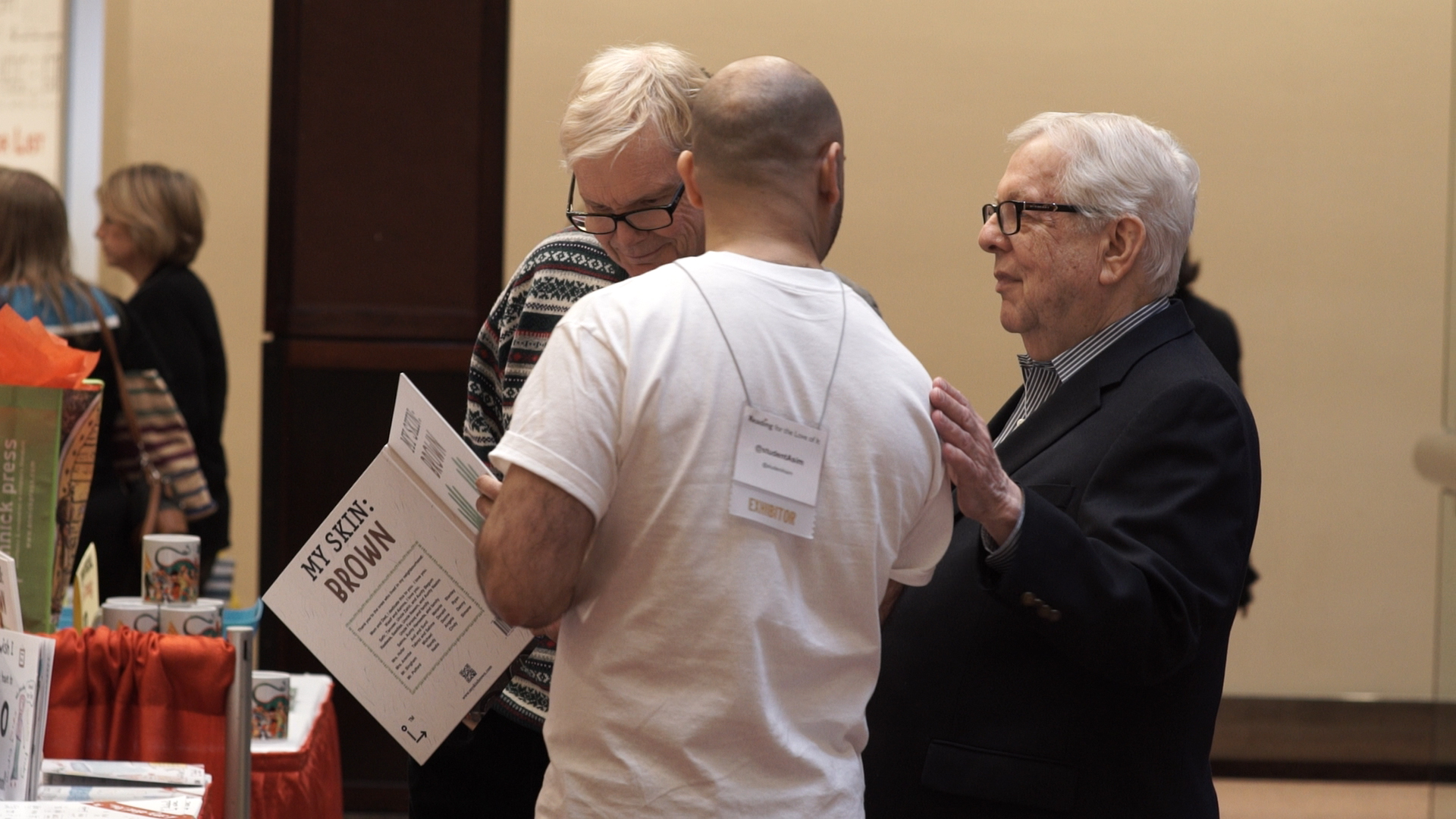 The man was amazing. He took me in as one of his own, when I used to walk the halls of OISE hoping to just get a few minutes from any professor about my work, and was rejected by nearly every single one. But fate always has its way. That very act of knocking on doors, led me to knock on Professor Booth's door randomly one day over 5 years ago, and that day, as I would come to realize, was the day I met an Angel In My Life.

I quickly explained I had a script and needed help with it. His reply, "Sure, come on in. Have a seat!" He helped me on EVERY single project I've done to date and I dedicated my 3rd book to him. We were working on the 5th book,The Tyer of Ties, before his passing. 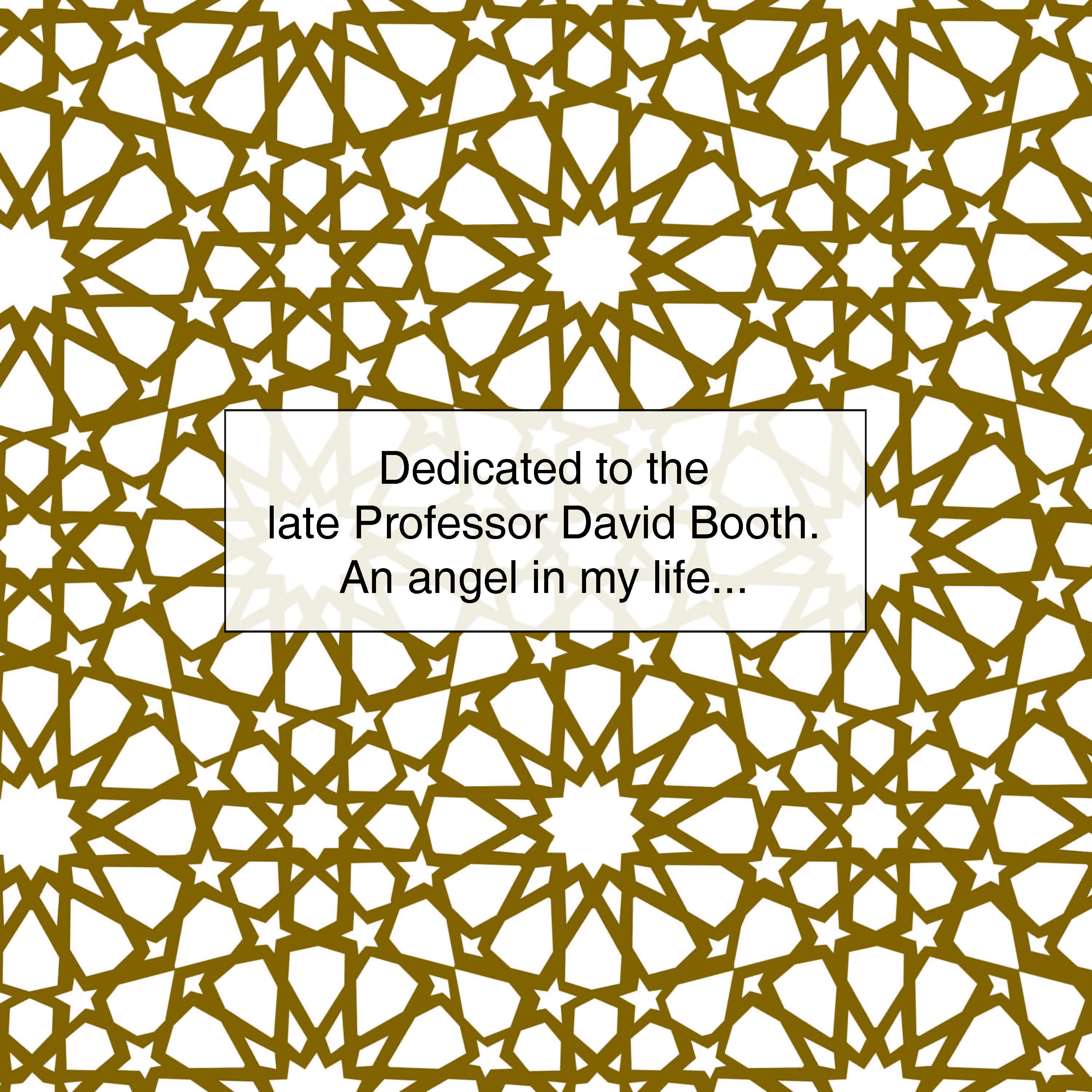 He actually RESPECTED my work and encouraged me. He featured my print in his office. Do you know how HUGE that is? An icon like Professor Booth liked my 300 Language print (poster) when he didn't have to, but he genuinely did. He showed people my books and featured My Skin:Brown  front and centre on his bookshelf.  I'm lost for words. 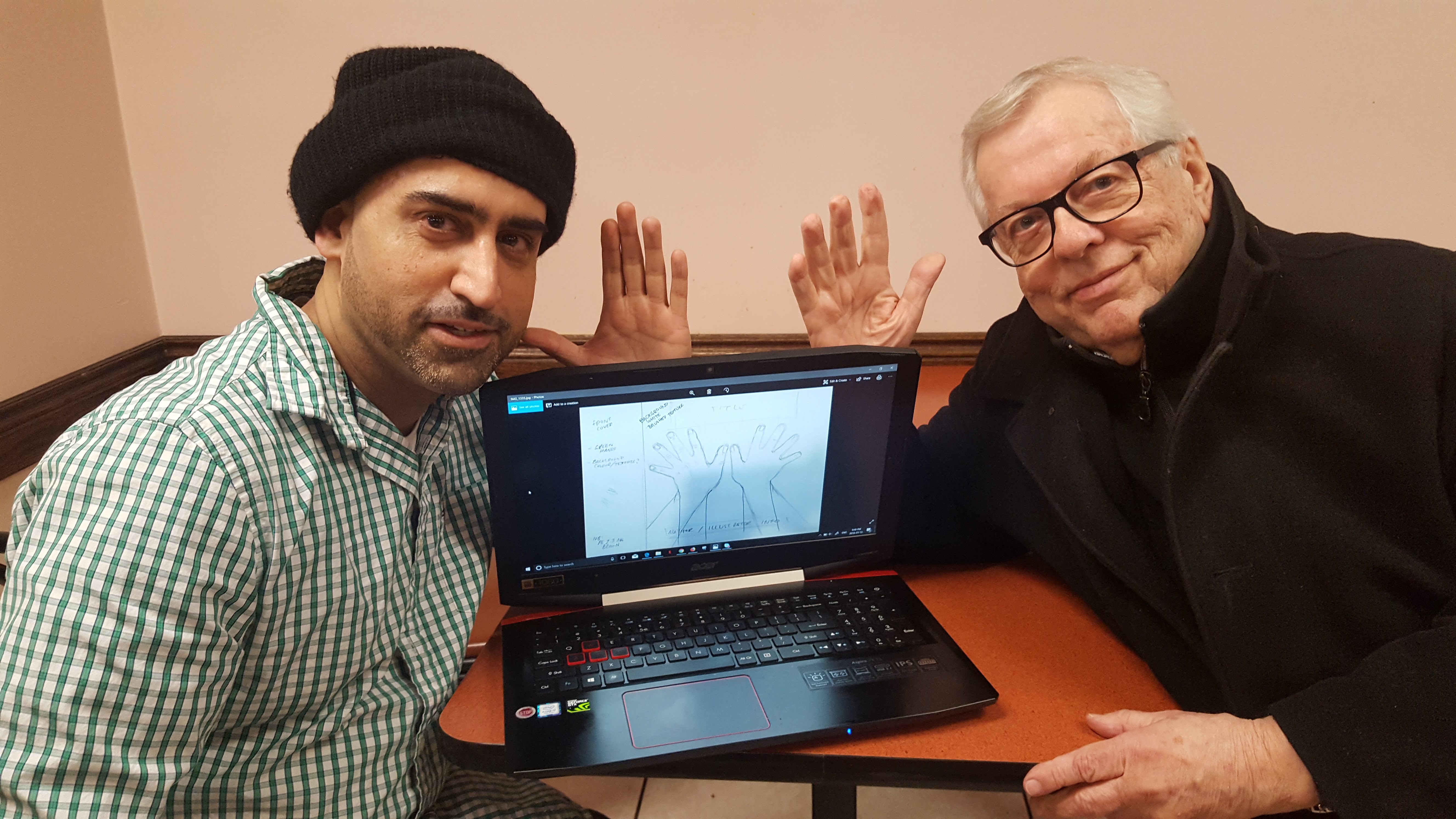 Professor Booth and @studentAsim simulate book cover for My Skin: Brown before publish.

Professor Booth happily showed me work to others in his office. In the video above, we have my 4th picture book title, My Skin: Brown, and The Famous Champion fo​​​​​r Life™ print.

When I went to Pakistan (and Spain), I'd call him, as I did this past September 2018. I wanted to be in touch. I regretted not buying that amazing photographic book on Pakistan at the Lahore Museum. On my last day of my trip, I scoured all of Faisalabad to find something even half-decent as an amazing gift for Professor Booth.

One of our favourite spots was Makkah Restaurant on the Danforth. He loved the food, and especially the naan. Recently at Makkah, I showed him the behind the scenes shots of the Pakistani children I worked with for the My Skin: Brown film, and his eyes welled up. He said: "The children...the faces..." There was a deep love for children and helping children succeed no matter what colour or creed. 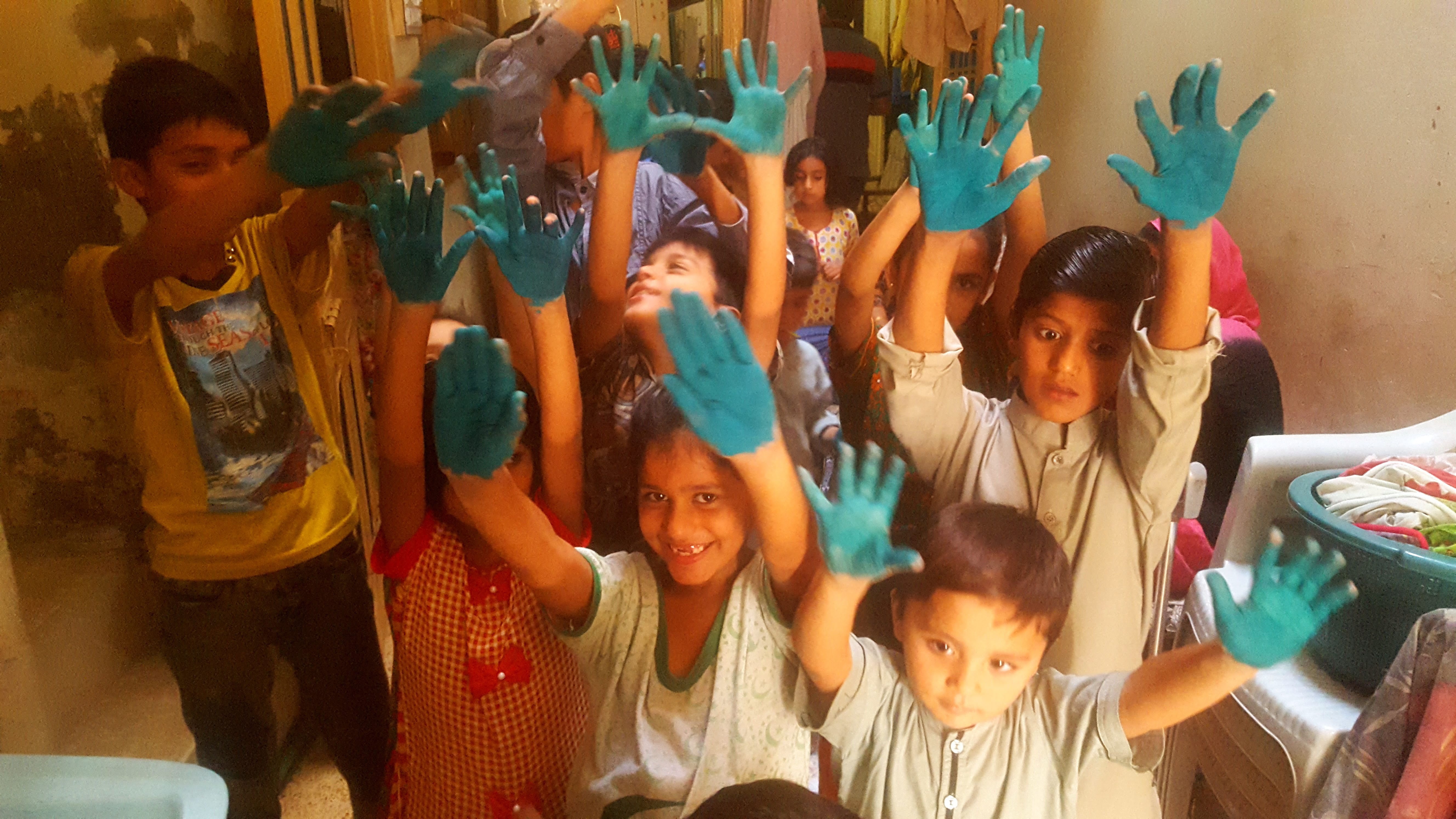 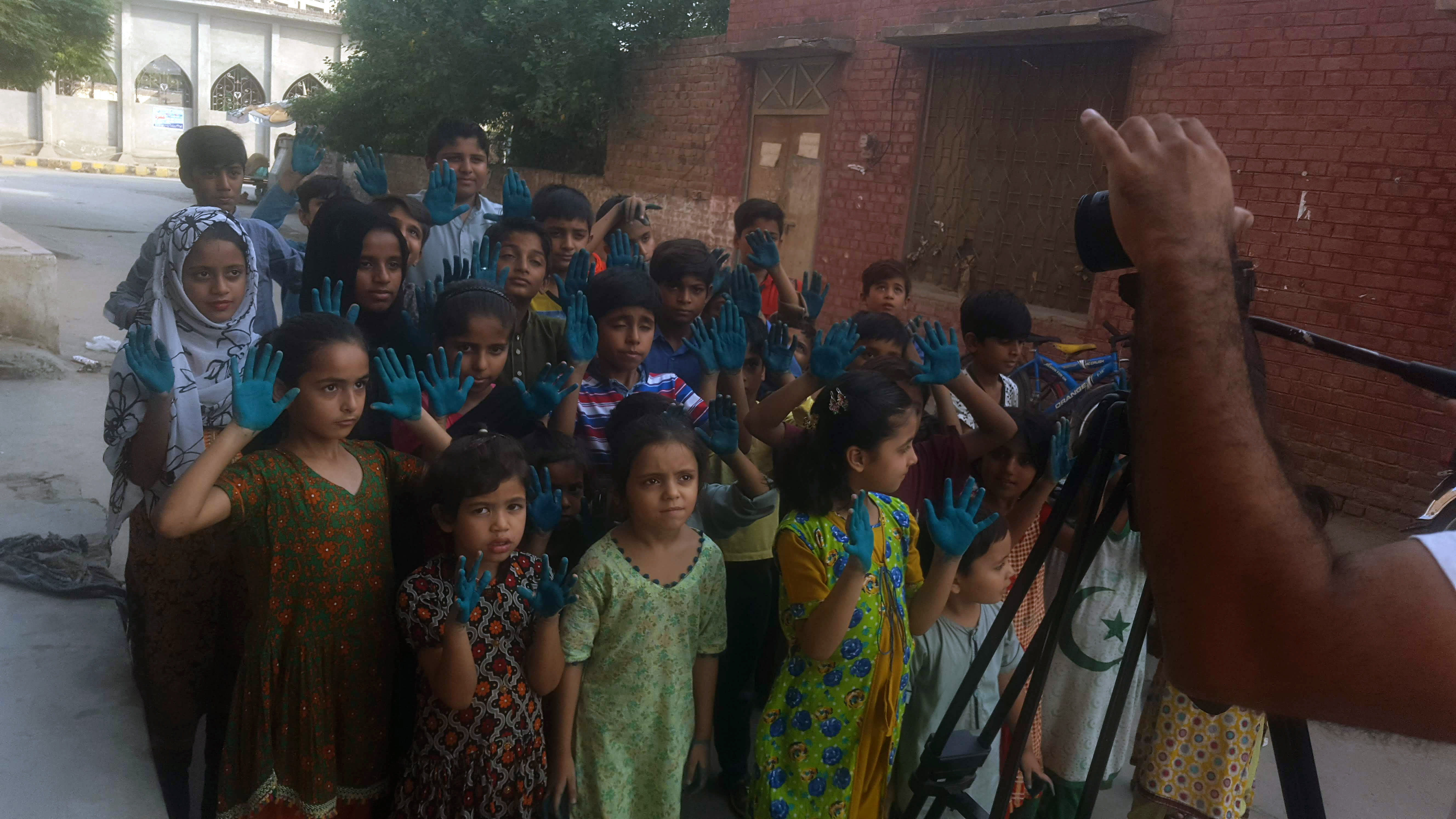 It was evident that there was a deep love for children for Professor Booth and helping children succeed no matter what colour or creed. 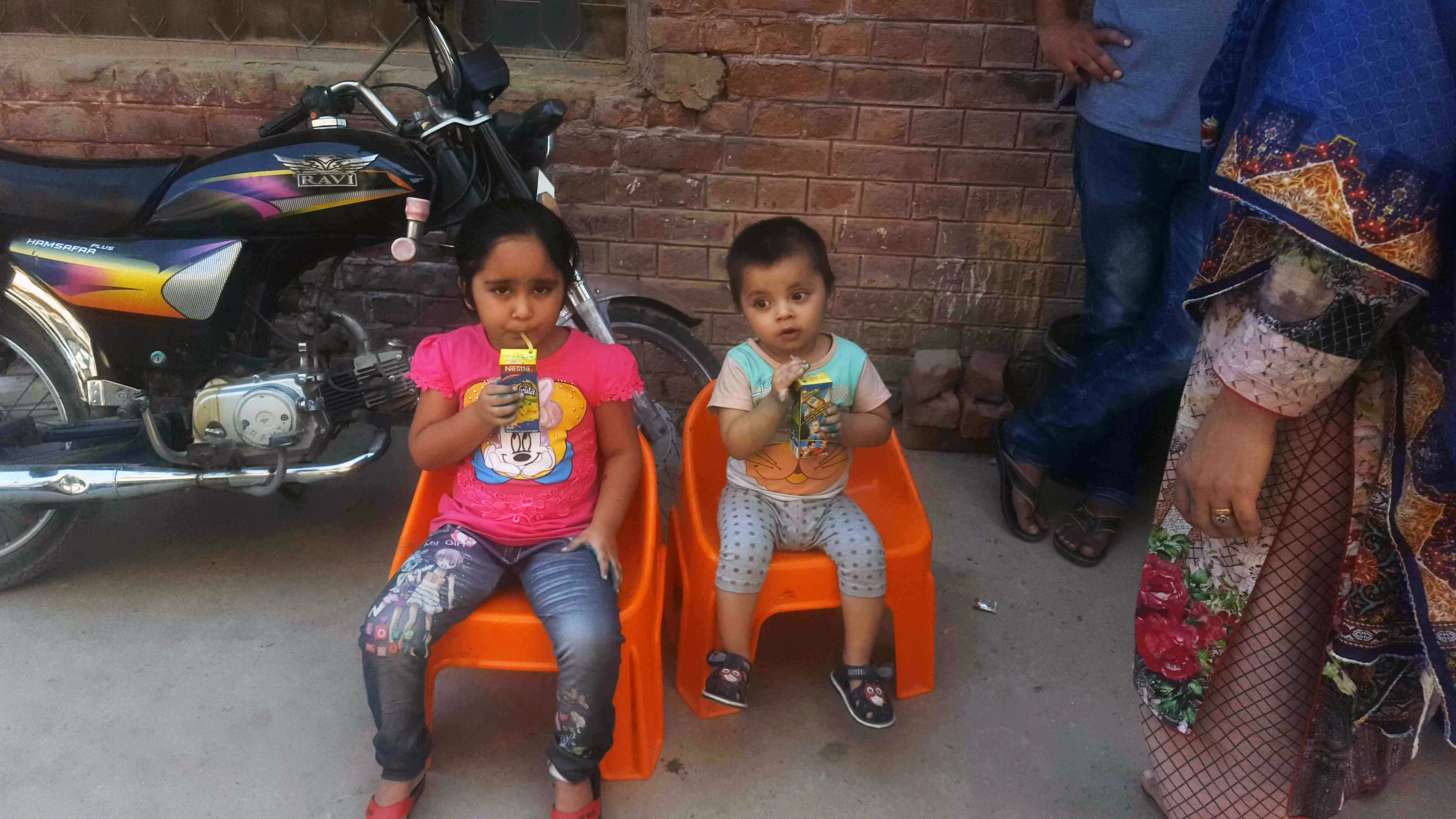 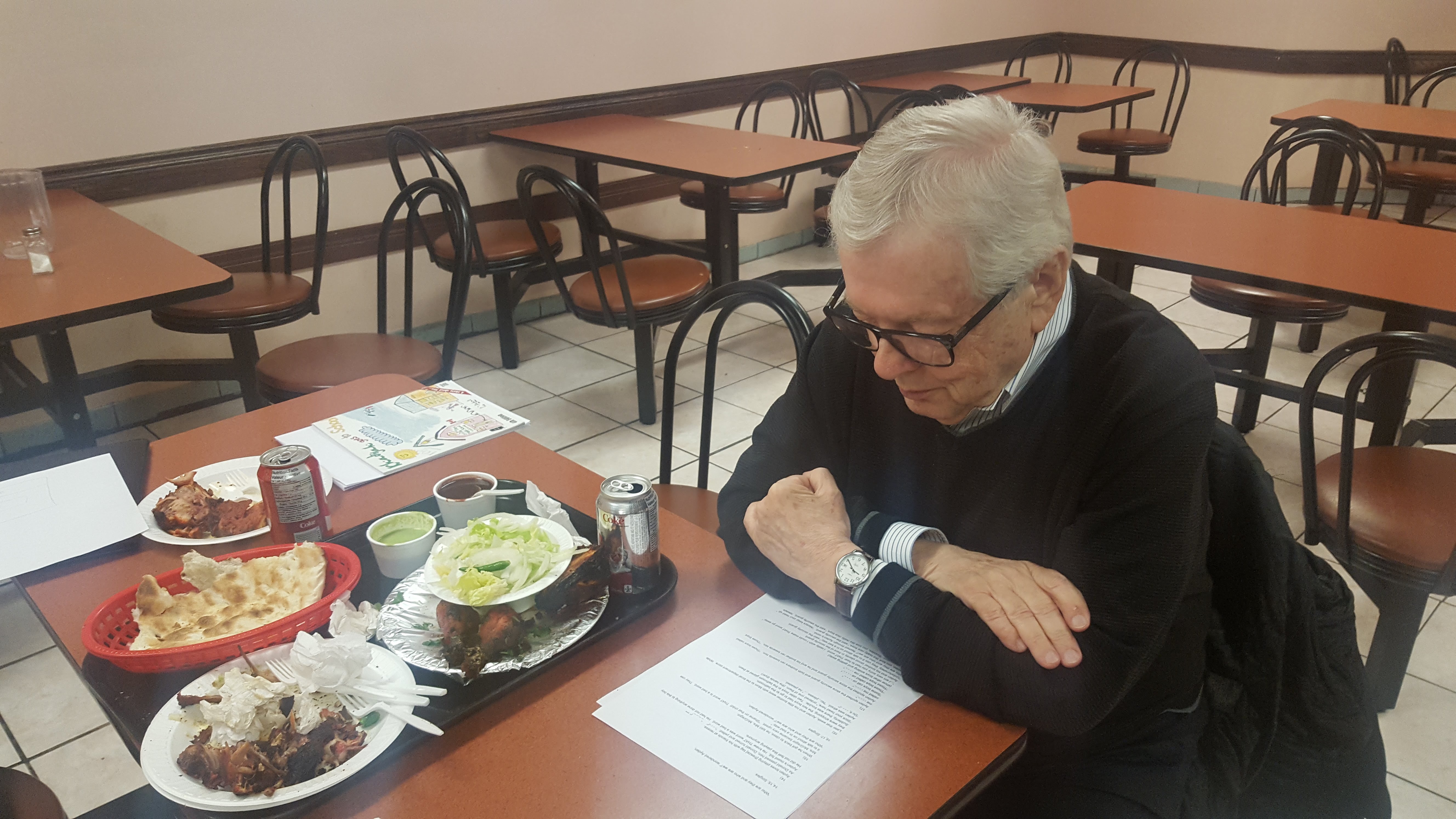 Professor Booth was so generous.  Anytime I needed Professor Booth, he was there, no questions, no excuses.  Here, he is reviewing a couple of my scripts, Khadijah goes to School, and the latest script for book #5 The Tyer of Ties, after a meal at Makkah Restaurant. And he loved his diet Coke!

Every single project - all 5 of my picture books - has a thank you note to Professor Booth. My 3rd picture book (published in 2017) was dedicated to Professor David Booth (while he was alive), The Young Grasshopper and The Old Butterfly 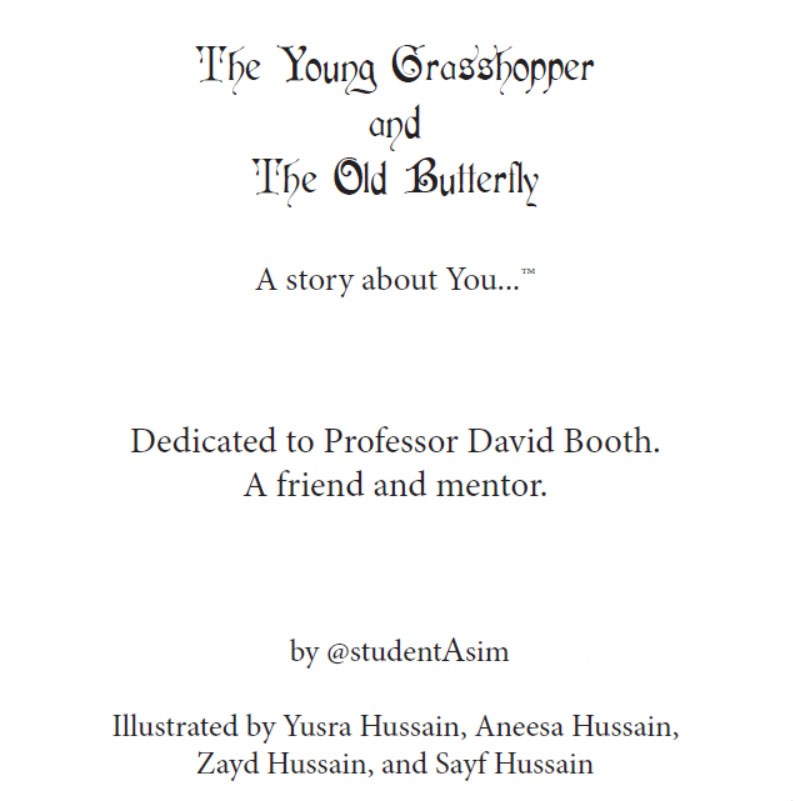 In the summer of 2018, we went to a Somali restaurant for the first time, and him being so gracious, thanked me for the experience. I said it was nothing, but he observed the place like a child and was so fascinated by all these unique experiences in Toronto.

Having a Somali meal at Hamdi's in Toronto. Great moments. Blessed times...

"I've spent my life with students,

What am I going to do without Professor Booth! 🙁 When my life was hard, I knew I had Professor Booth. Anytime. Anytime! And I'm so fortunate he enjoyed our relationship. There were so many moments, so much creative conversation, so much of everything, so much of the mechanics of my life.

He told me to stay strong in my faith and be proud of my faith. It mattered to him. And he also told me that because I pestered him, he now told others how to pronounce "Muslim" with the "s" sound, and not "z" sound (like Muzlim). Just so many great moments and conversations about faith, human rights, belonging, and so much more. 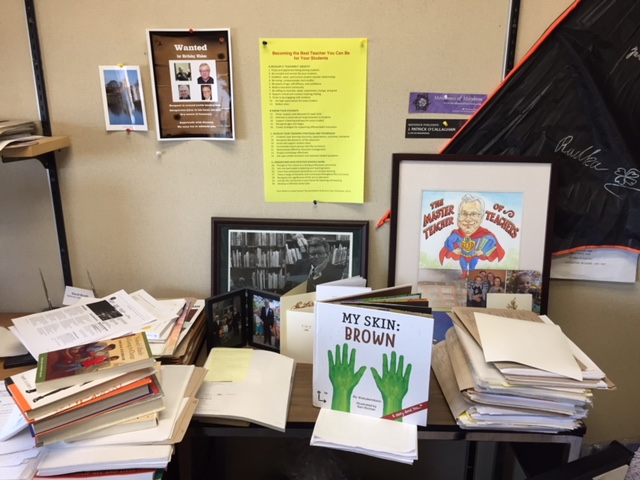 Middle back, black and white: A younger Professor Booth.  Back right: Caricature of Professor booth. In front: Professor Booth was generous to feature My Skin Brown (and my other books) to guests that visited his office.

"Canada at its best...I feel part of it, that's the good part..." Professor David Booth spoke so beautifully high of the Islamic community. Video shown of us at Muslimfest 2018.

What can I say. I have a hole in my life. And I can go on about this great man, who I think loved me and genuinely wanted to see me succeed, without gaining a single ounce of anything in return.

And I knew he wanted others to succeed as well. There were so many people that depended on Professor Booth. "That's what I do," he'd always say. There was a noor (light) on this man's face. People like this must be celebrated.

"Keep going with your talent." - Professor David Booth. He believed in someone like me...a random guy who walked into his office. Only Angels do that. ​Thank you. 🙁​​

All of this behind-the-scenes media was for my collection, but after his passing, I refuse to keep it hidden.

Have you ever had an Angel in your life?

When you didn't know what to do?

You were broke and poor

But trying to make it true

They were that light in your life

That shown themselves through

There was an Angel in my life

His name was Professor Booth...